As an Amazon Associate I earn from qualifying purchases. All product links on this page are monetized.
Try a Free 30-Day Trial of Amazon Prime. 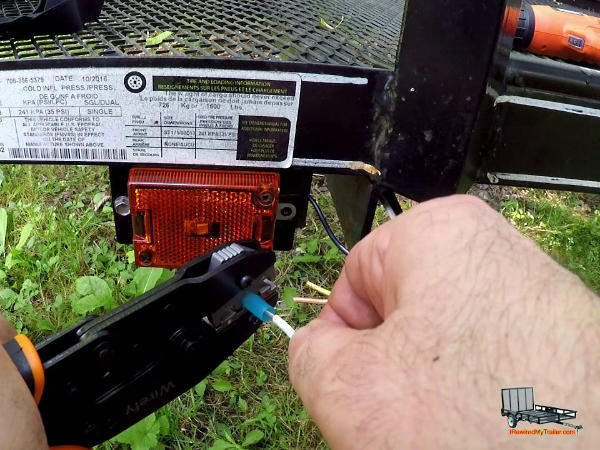 The next step after installing the main harness was to attach the ground wire and install the marker lights. The marker lights are the amber lights on the sides of the trailer near the front.

The marker lights on both the left and right sides of a trailer that uses a four-wire system are powered by the brown wires on the harness, which then run to the back of the trailer to power the tail lights.

The brown wires also power any other lights that are always on whenever the trailer lights are in use, such as the red clearance or marker lights toward the rear of the trailer if they're not integrated into the tail light housing.

In my case, I'd already run the brown wires through the transverse tubes and out the sides of the trailer in the previous step of my trailer-rewiring project. This step consisted of connecting the ground, connecting the amber marker lights, and running the wires aft to the tail lights.

On my trailer, the ground connection uses one of the attachment screws for the left marker light. That meant I had to lengthen the ground wire on the harness because the ground on the harness was too short, and you should never drill any holes in the trailer frame. I lengthened the wire by using a heat-shrink butt-splice connector to splice a section of wire into the harness ground before I sleeved it, so that wire was already present by the time I got to this step.

With all that wiring in place, here's how I proceeded to wire the marker lights and the ground.

That's the short version. For the rest of the story, you can watch the following video.

The next step in my DIY trailer-rewiring project was to run the side wiring and connect the rear trailer lights.